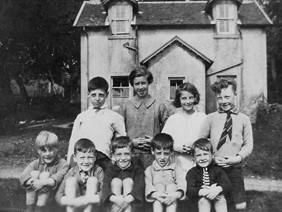 The building was previously, a stable, coach house, hotel garage and finally a workshop. By looking carefully inside and out, you can identify traces of the former uses of the building.

The centre nestles next to the Milton Burn Bridge in the village of Colintraive. Milton Burn takes its name from the former hamlet of Milton. The only remaining building, the stables and bothy is now home to the museum. The Colintraive village hall stands on the site of the former smiddy, and blacksmith’s croft.

Looking through the window of the old workshop office of Alex Grant, you can see a living area, typical of a small local cottage in the early twentieth century. It contains domestic objects donated by villagers from their homes.

Bring back your school memories by using the chalk board, sitting at the double school desk from the former South Hall School. The modern school furniture provides a contrasting place for children to draw, colour, complete quizzes and look at maps.

You can ‘inspect’ and take a ‘ride’ on the 1947 Massey Ferguson tractor. This is on loan to the museum by a former resident. Attached to the tractor is a double furrow plough. Because it is not a standard plough it is known as a ‘match plough’. This makes it rare as only a few were made. .

Hard copies of the late 19th century and early twentieth census and valuation rolls enable you to trace your ancestors and the occupations of inhabitants.